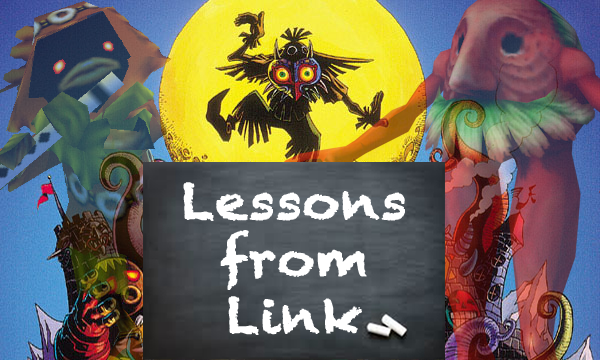 Since I was young, I’ve always found apologies to be the most important thing. No matter how much I was hurt, things were made better with an apology. They weren’t always better right away, but I knew from then on it was only going up from there.

It’s hard to remember this when you’re older, however. It’s easier to take mistakes to heart and look back on the past and see all the faults in a person. It’s very hard to see the reasoning behind it when you’re on the other side. Sometimes it seems almost impossible to be the bigger person in cases like that. It makes sense that the Four Giants need to be so large to forgive Skull Kid in The Legend of Zelda: Majora’s Mask. (OK, I’ll see myself out.)

Skull Kid made mistakes and hurt so many people because of his actions. He stole from the Happy Mask Salesman, turned Kafei into a child, unleashed monsters across Termina, and turned Link into a Deku Scrub. Though he made these decisions and we know he needed to face the consequences, we also need to realize that there was some sort of reason for this, no matter how crazy it is. It doesn’t excuse him for doing so, but the path to forgiveness becomes clearer.

The Four Gods left Skull Kid behind years ago for they had important duties to uphold guarding the land. He didn’t understand that the reason they left wasn’t because they wanted to betray him; Skull Kid only believed that his friends just didn’t want to be friends anymore. He became incredibly sad.

As time passed, his sadness turned to anger and he began to take out his frustrations on all the towns’ people. Many suffered because of his actions, but no one understood that the reason for all this was because he was hurting.

This doesn’t excuse all mistakes. Being hurt and hurting others as a result of it is not a get out of jail free card.

Skull Kid then had to be taught a lesson about how hate could consume a person if he/she never learned to forgive. Hate makes you weak as a person and more susceptible to being hurt further.

Once he learned to let go, his outlook on life became better and he was able to gain his friends back and make even more. He took the time to apologize to his friends and Link for what he’d done and he was forgiven.

You may not always receive an apology yourself, however. If you do its your decision what to do with it, but being able to choose to move forward is the best thing you can do for yourself. All in all the point is it’s never too late to say, “I’m sorry”. Skull Kid taught me that those two words could change a person’s life for the better.

I’m still learning to forgive. There are many apologies I’d wish I’d gotten, and many that I’m still waiting for. I’m doing the best I can and recovering as much as possible. As time passes, I also realize that I need to be patient with and also forgive myself. I think you could benefit from it, too.

Can you learn to forgive and forget? Was there a lesson Link or any other character from Zelda taught you that has affected you to this day? Let me know in the comments below or on any of my social media.