Every night after midnight, Kamaro dances as he watches the moon, urging it to pass along his passion for dance. 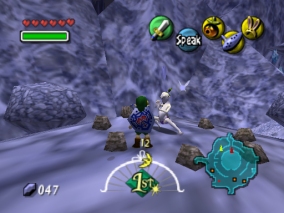 He wears nothing but his drawers where he stands North of ClockTown. When spoken to, he tells Link he is a spirit that has passed away.

I am disappointed, oh moon. I have died!- Kamaro

Every other character that had died has had a story explaining what happened to them; Darmani being blown off Snowhead, Mikau being attacked by Pirates, and even the Deku Butler’s son who was killed by Skull Kid. Kamaro is the only one of these characters who has passed on and asked to be healed without an explanation to his death.

Kamaro appears before us almost naked with the palest skin you may see in Majoras Mask. He is almost blue he is so pale. Could his skin be frozen?

It is said that hypothermia makes a person so cold that they feel hot. They begin to remove their clothing and are left only in their under garments.

“Heart rate becomes slow, intermittent and weak, and the blood vessels widen. This makes a person feel hot and want to remove all their clothes before they finally slip into unconsciousness. Ultimately, the heart stops.”- Climbing High

Kamaro’s spirit is found right outside of Snowhead where “mushroom” looking mounds stand high surrounded by Dodongos or Eenos depending on the time of day.

It’s not improbable that he may have traveled some after his death, just as Darmani had. (Darmani died at SnowPeak, but his spirit was found in Goron Village.) Kamaro’s obsession with the moon leads me to believe he may have tried to climb the mountain where the hot spring and Darmani’s grave is, in Mountain Village, in an effort to put on a performance for the moon.

This pond is the only body of water open in Snowhead that hasn’t completely frozen over.

He may have attempted to cross the water and fallen in or could not solve the climbing puzzle and fell to his icy death. Whatever the case he ended up soaked and cold and fighting to stay alive. His body’s natural reaction to such cold caused him to remove his clothing and therefore caused him to pass away in his under garments.

Since then he has been roaming Termina, regretting his passing and unable to move on without the help of our hero, his ocarina, and some fly dance moves.

Do you agree with this little theory? Leave your comments down below!

Want to play this game for yourself? Here’s a link to purchase it!
The Legend of Zelda: Majora’s Mask 3D